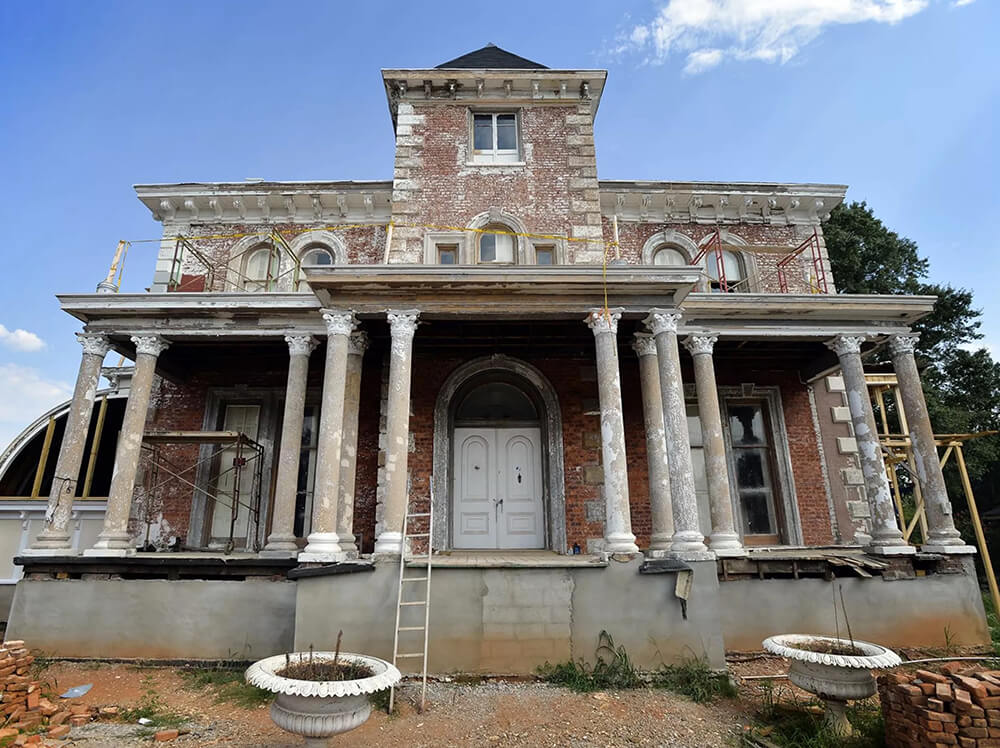 IT’S BEEN NEARLY A YEAR SINCE A MONUMENTAL MOVE SAVED THE HISTORIC WILKINS HOUSE FROM DESTRUCTION. NOW A DECONSTRUCTION IS REVEALING THE DEPTH OF ITS AGE.

It’s been nearly a year since a monumental move saved the historic Wilkins House from destruction — instead leading to a deconstruction today that is revealing in imperfect detail the depth of its age.

A simple drive by the mansion’s new resting spot on Mills Avenue offers the most striking image.

The white paint that once entirely covered the house’s 139 years of wear and tear has been stripped away, revealing the original red brick — and all the blemishes that come with the relentless march of time.

The columns and quoins that frame the entrance are a muted mix of brown and various shades of dull gray.

Inside, there is more.

Plaster cracked by foundational stress and water damage has been chipped away and is in the rawest form of careful reconstruction.

The paint throughout, all lead-based, is coated up to 12 layers thick.

The work — and the cost — is more than Neil Wilson says he imagined when he became an unlikely benefactor to preserve one of downtown Greenville’s few remaining historic homes.

“I’m not going to be the guy who puts the 13th coat on it,” says the local retail developer, who had been more accustomed to tearing down old buildings to make way for new ones before learning last year that the Wilkins House faced the impending wrecking ball.

The “right way” has meant that the home built in 1876 to showcase the wealth of merchant William T. Wilkins appears for now as if it is falling apart.

The truth is, Wilson says, the paint and drywall added over the years only served to hide what is clear now that it has been stripped away.

What looks like the “before” in a before-and-after picture is exactly that.

But with a better “before” to come.

“It’s looking at one of its worst days, so to speak, but we’re not cutting any corners,” he says. “In the next few weeks, you’re going to see a lot of changes in the Wilkins House.”

Neil Wilson, owner of the Wilkins House, explains the progress made on the historic home’s renovation.MYKAL McELDOWNEY/Staff

Neil Wilson, owner of the old Wilkins House, walks through the home and explains the progress made on it’s renovation on Wednesday, August 8, 2015.

The Italianate-style mansion was built at the end of the Reconstruction era on what was once a 93-acre estate along Augusta Street, just three blocks away from its new location on Mills Avenue.

Wilkins, a Spartanburg merchant who made his fortune in New York, went above and beyond with ornate features.

One preservationist involved in saving the house from demolition, Kelly Odom, estimates that the cost to reproduce such a home today would be $10 million.

The price tag to restore it has yet to reach such heights, but the cost involved is “well above” the original $1 million estimated, Wilson says.

Knowing now all that is involved, would he step in today as he did a year and a half ago when preservationists made their plea to save the home?

“I would like to say yes — but I’m not sure,” Wilson says with a wry smile.

Over the course of the 20th century, Augusta Street transformed into a commercial corridor that today faces intense development pressure.

The home transformed with it.

For 60 years, the Jones Mortuary inhabited the home, the owners painting its exterior white, adding on wings.

The additions prevented the home from being named to the National Register of Historic Places, leaving it vulnerable to demolition.

After the mortuary, the home served as an antiques shop and most recently as a bridal event space.

The wave of downtown redevelopment finally washed to the doorstep of the mansion in late 2013.

Developer Dan Simmons eyed the four-acre property for the Waterstone Assisted Living Facility, a 104,000-square-foot assisted living and memory care center with 114 units that he says will begin construction by the end of this month.

The Wilkins House would be too costly to save, Simmons said, and impossible to use on the site.

Preservationists moved into action when plans to demolish the mansion were revealed.

Greenville, with its notorious penchant for tearing down its history, had already lost three historic homes in the Augusta Road area alone — the Cureton House, the McCuen House and the Otis Prentiss Mills House. In January 2014, a Save the Wilkins House Initiative formed.

Then word got to Wilson, who, through the RealtyLink business he founded with his twin brother, previously had looked at the property for a grocery store.

Two months later, the Save the Wilkins House group, Wilson and Simmons teamed with the Palmetto Trust for Historic Preservation to pull off a big move.

The cost to move the home would be $720,000 — Wilson paying half, donations raised through a Save the Wilkins House fundraising drive the other half.

Simmons gave Wilson the house and contributed $50,000 to the move.

In an agreement with the Palmetto Trust, Wilson, using his own money, would restore the home to its original form and grant the trust an easement to protect against future threats.

Upon restoration, the home would be placed on the National Register and opened to the public at least four times a year.

The home’s newer additions were demolished and the rest lifted onto dollies for transport.

On a Saturday morning last September, the 800-ton home was transported methodically over an eight-hour period — some trees cut down, power lines temporarily moved — to the corner of Mills Avenue and Elm Street.

“Everything had to fall into place,” Wilson says. “And it did. I don’t know why it did, but it did.”

Neil Wilson, owner of the old Wilkins House, walks through the home and explains the progress made on it’s renovation on Wednesday, August 8, 2015.

Joshua Gordillo had followed news of the move.

After renovation work finally began in January, Gordillo walked onto the work site and introduced himself.

Before moving to Greenville nearly two years ago, his trade in Orange County, California, had been as a drywall contractor.

But there is something else — he happens to be an expert in the art of plaster.

The walls of the Wilkins House, like the interiors of so many homes before the mid-20th century, are made of plaster.

Unlike modern drywall, plaster walls are painstakingly crafted. There are few craftsmen who work on them today.

Gordillo offered to work for half his hourly rate at first just to show what he could do.

Now, he’s taken on the months-long task of reconstructing the walls in the Wilkins House — made of the old mix of mud, sand and horse hair — tearing out defects, patching stress fractures and rebuilding ornate plaster ceiling molding.

“Up walks this guy,” Wilson says. “He’s an artist. I don’t know how somebody’s skilled enough to do what he does.”

The mansion is a full-time job for Gordillo — and part of a larger vision he has to start a business specializing in plaster work in Greenville, which is seeing a surge of renovations as people look for creative ways to move into the city core.

“To get established, you have to have a reputation,” he says. “My whole idea was to land this job, do it, and then when someone says, ‘What have you done?’ I say, ‘Well, what about this one?’”

By the time he’s done, Gordillo figures he will have worked on the house for a year.

Renovation of the old Wilkins House continues on Wednesday, August 8, 2015.

The work will be complete, Wilson hopes, by the beginning of next summer.

The construction site buzzes with activity throughout the day.

The white paint was removed from the exterior with solvent, a costly method but necessary to avoid damaging the brick.

The interior door moldings — featuring seven separate pieces of stain-grade wood crafted together — have been carefully stripped of paint so that the original texture can be seen.

The former solarium is being preserved. Hidden gems covered by drywall over the years will shine again.

But not all will be old.

Another 3,200 square feet will be added to the original 6,000-square-foot floor plan.

Carpenters have been busy framing for the new additions that will make the Wilkins House a home as well as a museum.

Wilson will live in a rear, modern portion of the house and leave the front end for display and for entertaining charity fundraisers.

Amid the sound of generators firing up to power electric nail guns and saws, he points to the shell of what will soon become a new den.

“I’m not a formal person,” he says, “so I’m not going to be sitting in there with stuffy furniture and that kind of stuff. I’ll be in here. Come by and get you a beer, just have a seat.”

A man cave, then?

In a newly created basement, Wilson will have a home theater equipped to watch sporting events — “four games at one time,” he says.

There will be a wine bar, billiards room and an outdoor kitchen.

He plans to move into the downstairs area in about a month so that he can more efficiently oversee the renovations.

Everything must be done right.

“I count pennies, don’t get me wrong,” he says. “But there’s something from a historical perspective that you think less about the money and more about the finished product. Greenville does not have a good track record of hanging on to the past. It’s got a great track record of building for the future.”

Now, no matter how he got here, Wilson is doing both.